Local fans may not have cheered the final score last Thursday, but the Stadium itself got a lot of attention. Two of the installations conceived and designed by C&G Partners appeared in the sports pages of the New York Times that day in an article about baseball icon Yogi Berra. Berra, famous for his abilities and “Berra-isms” alike, is one of two players featured in a tableau of the “perfect game” that is the centerpiece of the new Yankees Museum.

At the end of that famous game (1956 World Series Game 5, the only no-hitter World Series game on record), Berra ran from behind the plate to hug pitcher Don Larsen. That classic image has become a permanent mural at the Stadium, below a dynamic surface that morphs to quote different Berra-isms. 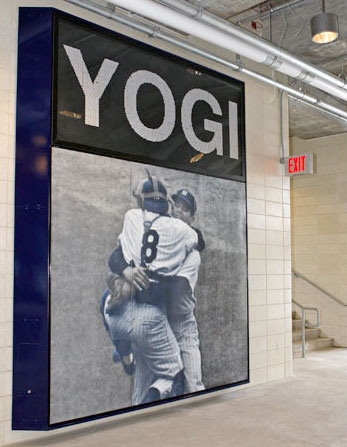