“Native New York” for the National Museum of the American Indian

The exhibition Native New York follows a 400-mile path across five centuries, showing us that New York is—and always has been—a Native place. C&G Partners partnered with the Smithsonian National Museum of the American Indian on exhibition, graphic, and media design for this recently opened, permanent experience in downtown “Manahatta”.

Acting as lead designers alongside the museum’s own team of curators, historians, collections specialists, AV, and facilities staff, the studio conceived the exhibition like a walk-in graphic novel, constantly in motion. It was designed for all visitors, with a special emphasis on the educational curriculum of local students.

The organizing principle of the experience is unique, neither chronological nor thematic. It follows a literal trail, hundreds of miles long, through New York State and New York City: at one end, the Hamptons in Eastern Long Island; at the other, Niagara Falls in far Western New York. Along the way, a dozen stories touch on five centuries of history. Each stop teaches the history behind common myths, blending Native objects with interactive media, all wrapped in theatrical design techniques. 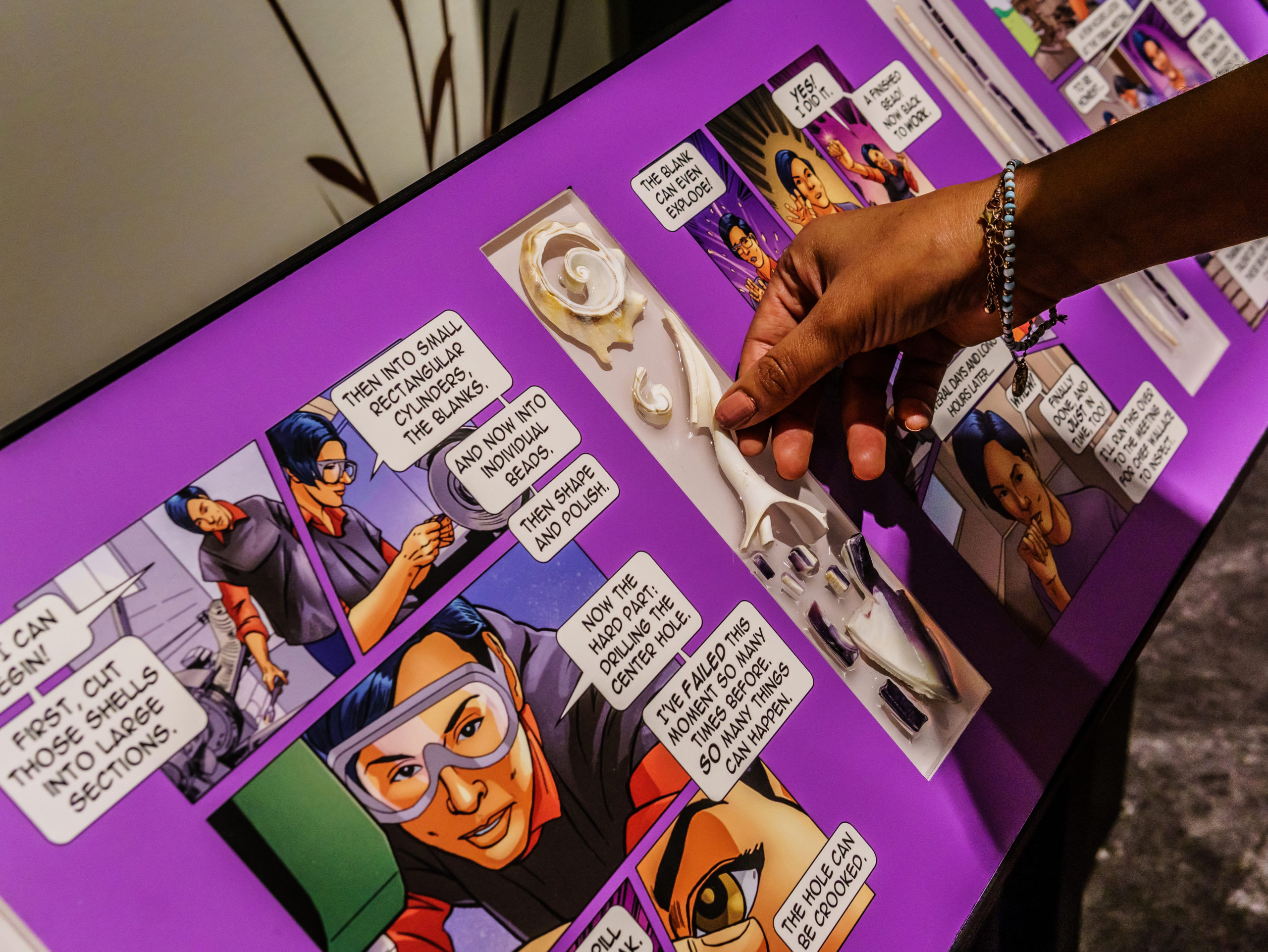 Through the Museum, custom illustrations throughout the exhibit were commissioned from Native graphic novel creators, often directly paired with hands-on touchable elements drawn from each story. The graphic novel theme exists at all levels: from individual interpretive panels to entire exhibit stations and even to all the surfaces of every wall throughout the entire project. Illustrations cover traditional craft, the myth of the “purchase” of Manhattan, and the intricacies of the 17th-century fur-trade economy. The trail “markers” at each exhibit carry the title of the location depicted — both the official modern one, and the actual Native name of the site. Near the center point of the path, an interactive circular “lake” engages visitors telling stories of Native tradition and teaching how they relate to modern-day efforts to reduce pollution in Onondaga Lake, in upstate New York.

An experience about the story of Van Cortlandt Park, in the modern-day Bronx, uses a wall-sized lenticular panel that flickers between two realities. One of its two images is a photographic moment in the park of today; the second is a hand-drawn scene evoking what is now referred to as the Stockbridge Indian Massacre. As visitors move, the scene oscillates between the two. A central tower carries a projected cut-paper-style shadow show, visible in both directions, that dramatizes the events before, during and after the burning of Native lands in New York during the Revolutionary War. Multiple kinds of maps are used throughout the project, both to orient visitors to where they are as they move along the trail and to tell historical stories of Native people across centuries.

At a section of the trail that stops in midtown New York City, visitors experience the remarkable story of the native Mohawk “skywalkers” — responsible for the steelwork in many of NYC’s most famous buildings. Subtle effects exist all around the visitor, including a light show that tells stories of the seafaring traditions of the Shinnecock Nation, which is today located inside the Hamptons region of Long Island, east of New York City. 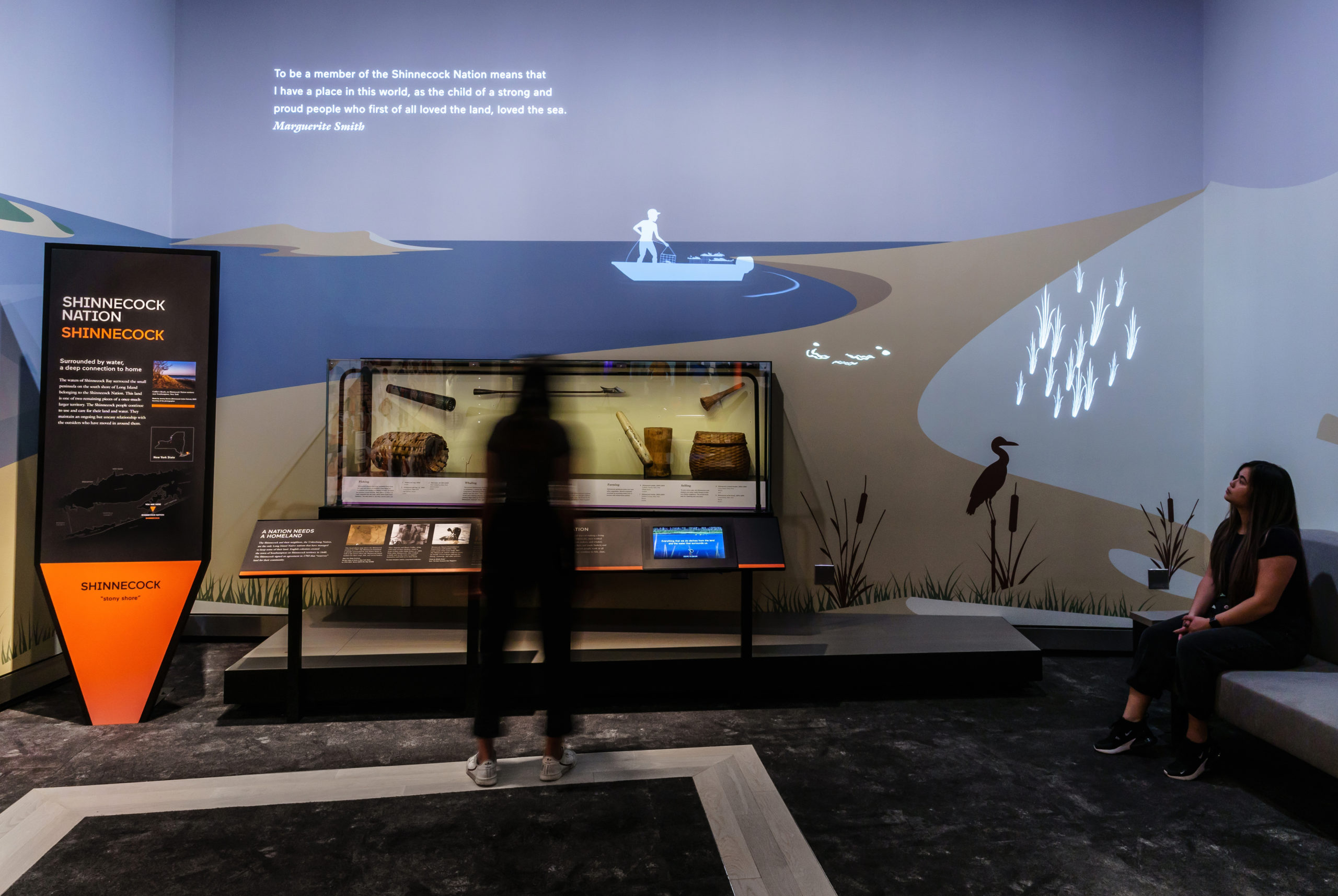 Manhattan itself takes its name from the Lenape word “Manahatta,” meaning “island of many hills.” Archaeological discoveries made on the island point to Native use of that land for a long period before the arrival of European explorers. 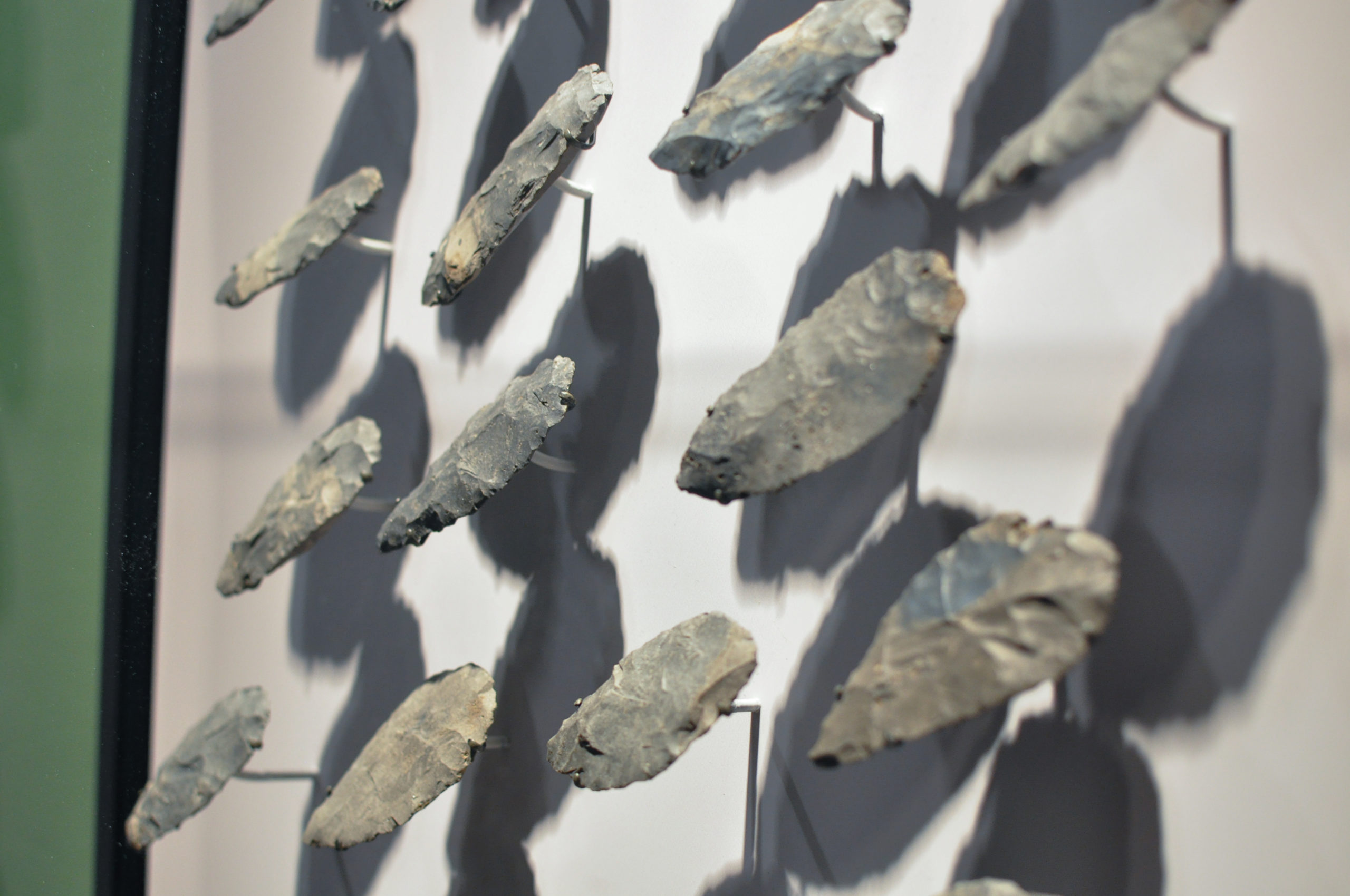 The legendarily fearsome Iroquois Nationals lacrosse team plays a key role in the experience. The game of lacrosse, played today by non-Native and Native players alike throughout the world, originated as an important cultural practice for Native people in what is today New York State. The media in the exhibition does not appear to be media, going beyond screens to build an immersive feeling. Unusual techniques include projections that are double-sided, shows mapped as “magic paintings” onto sculptural picture frames, and gesture-activated digital experiences. The geometries found in the Native New York logo pay tribute to Native American “treaty belts” used to record historical events. The experience leaves visitors with the question “Who are the REAL native New Yorkers?”

In addition to the collaboration of the excellent team of the Museum itself, both in DC and NYC, the project would not have been possible without extraordinary design collaborators: Architects and Engineers, Ewing Cole; Exhibition Fabrication, Hadley Exhibits, Inc; Lighting Designers, Available Light and Jeff Nash Lighting; AV Media Consultants, Phase Shift; Diversified, AV Integrator; and Security Consultant, GHD.

“Native New York” is permanently open, and free to the public, at the Smithsonian’s National Museum of the American Indian in New York.